A remark of the obtained results is provided next. Please, contact us if you want to know more or check the scientific contributions.

Classification results exploiting a Eigen-value decomposition of the Multibaseline Interferometric coherence and a Random Forest algorithm.

Sentinel-1 allows to generate InSAR data stack in multiple ways exploiting the very low temporal sampling (up to 6 days repeat pass using S-1 A and B) and the polarimetric capabilities (co and cross polar channels acquired in default mode). Within the project, the impact of these alternative possibilities and features over the classification has been analyzed.

Sentinel-1 A/B sensors allow to capture polarimetric data on the co-polar and the cross-polar channel. In the default mode these are acquired with a Vertical (V) polarized wave and both the Vertical (VV, co-polar) and the Horizontal (VH, cross-polar) channels are acquired. The effects on the classification performance of considering the first, second or both channels simultaneously is shown in the following image

Sentinel-1 consists of a twin constellation considering both the S-1 A and B satellites, each of them with an nominal revisit time of 12 days. In particular areas of the world, mostly in Europe, the temporal resolution is reduced to 6 days whith both systems working sequencially , i.e. an acquisition is obtained with interferometric capabilities with this frequency. A comparison of the classification impact of considering a regular S-1 A/A or B/B at 12 days versus A/B or B/A at 6 days is provided in the following image

The nature of the SAR products allows to exploit only directly the intensity of the data when working with single SAR data, and it is common to use them in the mapping context. In this framework, the contribution of the interferometric domain, i.e. the interferometric coherence, has been also evaluated compared to the use of the SAR intensity but also in combination with it.

Within the project, special atention has been put in the cultivated areas as the one located in the south of the Doñana test site. In the following image we can observe the inherent dynamics present in the interferometric coherence of this cultivated area in the south west of Spain coming directly from the multitemporal covariance matrix. The main diagonal corresponds to 6 days temporal baseline interferometric coherences, the next diagonal to 12 days, 18 days, 24 days and 30 days. 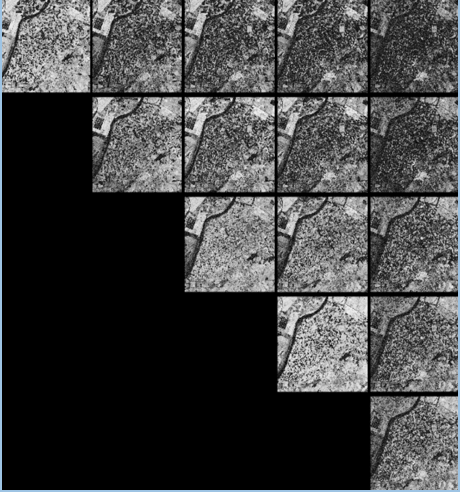 For the analysis the following ground truth at parcel level is available and used for training and validating. Groud data were kindly provided by the Consejeria de Agricultura, Pesca y Desarrollo Rural of the regional government of Andalucia. 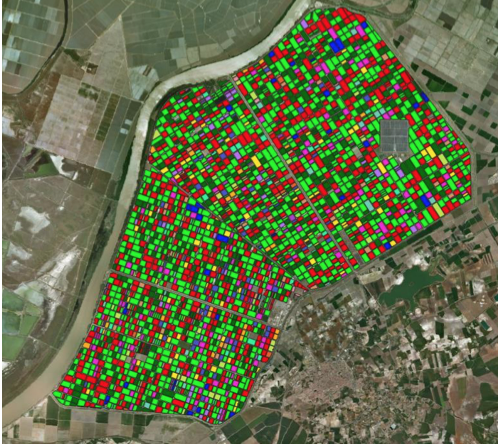 With the obtained results shown next, it is demonstrated that the interferometric coherence constitutes a valuable feature for generating automatic thematic maps of crop types. Overall good classification accuracies have been obtained. Best results are obtained with the shortest baseline (6 days) and the accuracy progressively decreases when more temporal information is considered (12 and 18 days) as the temporal decorrelation induces a bias in the classification.